Below are the recent results of various local and international kung fu tournaments or competitions where Golden Lion students have successfully won medals and trophies. By way of introduction, here’s a brief account.

In the western world, contemporary Nan Quan forms are the forms of choice at kung fu tournaments and Chinese martial arts competitions. In Australia and throughout the world, there are now National Wushu Championships that offer modern and traditional forms, divided into male, female, adult and junior divisions. 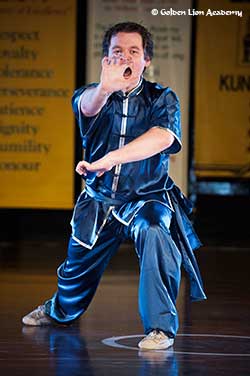 These martial arts competitions are now standardised so that any person from any country can be judged according to the same criteria. This means that a person participating in any one division will be judged on the same series of movements, referred to as ‘forms’ or ‘routines’. In Chinese they are called ‘kuen’ or ‘kata’ in Japanese.

International competitions include the bi-annual World Wushu Championships, which includes not only the modern bare hands and weapons forms, but also Sanshou, which is full contact sparring.

And of course, there are special instructions on how to train for these tournaments.

See below for the achievements of our students at some of these tournaments.

More articles about these tournaments can be found on our Blog.

A new addition to the World Wushu Championships scene is the World Traditional Wushu Festival; the first was held in Zhengzhou, China, October 2004. The festival attracted over 2,000 competitors from 60 countries and was held in two stadiums built specially for the event.

The students of Golden Lion Academy won a total number of 9 Gold, 16 Silver and 4 Bronze medals. In addition, the Gold Cup for the Tai Chi Team Event was also won by Golden Lion students.

Since 1988, Golden Lion Academy has had its students selected in every Australian Team. It is anticipated that the evolving and popular Nan Quan forms will attract many more participants.

The tournament was held in Canberra, Australia, and run by the Australian Kung Fu Wushu Federation.

Congratulations to Rosemary Hermans who won two gold medals at the Australian Kung Fu Wushu Championship held in Perth on 29 May 2016. Rosemary competed in the Southern Bare hands and Southern Broadsword divisions. She is a member at our Rowville Centre, trains regularly three times per week including the specialised bare hands and weapon class under the guidance of Sifu Steeve Kiat.

The 2016 Victorian State Championships was also held on Sunday the 31st of July.  Golden Lion Academy won 13 first places, 4 second places and 1 third place. Click here for photos and more on that tournament.

Held on May 28th 2017 in Keysborough, Victoria (it is rotated across states), 15 students represented the Golden Lion this year. In total, 14 Gold, 6 Silver and 3 Bronze medals were won by our students. Congratulation to all.

If you would like to attend regular classes and perhaps compete in tournaments one day, please call us on our central telephone number 9796-1066 for class times and fees or email us through our contact-us form.