Here’s an important overview you should know before you begin learning tai chi. And don’t forget that you can now access some of the Golden Lion Academy’s programmes through our books and videos; they have recently been made available to the public. 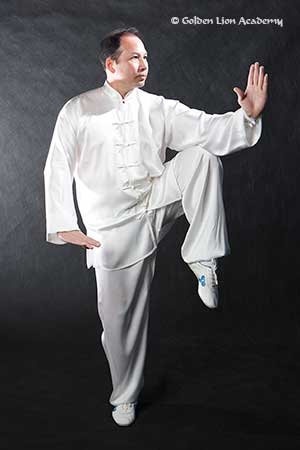 Tai Chi as the “Grand Ultimate or Supreme Ultimate” while Chuan the “fist – boxing” represents the martial or fighting art of tai chi.

In China, you’ll see tai chi as Tai Ji or Tai Ji Quan. This is the official Chinese government pin yin spelling based on the mandarin dialect. You’ll also see it referred to as a branch of “wu shu” – the official umbrella name for martial arts that includes all the various styles of martial arts such as tai chi and kung fu.

Tai chi or Tai Ji means the same thing. The only difference is in the various styles of tai chi that are taught.

The splendour of tai chi is the Taoist (or daoist in pin yin) belief that everything in the universe depends on the interaction between two polar opposites: Yin and Yang.

In tai chi, Yin is represented by the soft; it also indicates the night, the negative, earth, or the intellectual; whereas Yang represents the hard, the positive, day, sky, or the physical.

The balance and harmony that is aimed for while doing tai chi is representative of yin and yang. Each aspect contains within it a seed of the other – within yin there is an aspect of yang present and ready to manifest itself. Neither is absolute. Each depends on the other.

Practised since the 16th Century, a number of different bare hands and kicking techniques are used. These include various palm strikes, blocks, fist techniques, high kicks and low kicks, depending on your ability.

Stance training such as the horse or bow and arrow stance, and many others, lay the solid foundation that is necessary for us to perform good tai chi.

Push Hands are also an important component. It helps to polish up our techniques, improve breathing, co-ordination, footwork, balance and flexibility.

Various weapons such as spear, straight sword, stick or staff, the sabre or broadsword, and fan are used.

Chi kung or qi gong (again the latter is the spelling in mandarin Chinese) is also associated with the practice of tai chi so when you read about tai chi, be prepared to also learn about chi kung.

Today, tai chi is practised mainly as a health exercise. This has been supported with many scientific studies that have proved tai chi to be a beneficial exercise to prevent disease and improve health, for example, preventing falls in the elderly, for lowering blood pressure and for controlling diabetes.

Golden Lion Academy recommends, and teaches, a wholistic tai chi programme, one that focuses on health and healing plus also the martial arts. The martial aspect teaches the inner secrets, the authentic core, and cannot be withheld. In fact, the majority of tai chi styles evolved as a martial arts experience where effective fighting or self defence was paramount, with the health benefits being discovered much later.

Men and women of all age groups, from teenagers to the elderly or seniors, can be very skilful because the skill is not dependent on physical size or power but on internal power, calmness, precision with strength of mind and intention.

Our aim is to offer you quality education in tai chi; revealing only its authentic secrets.  You are welcome to enrol in any one of our classes, telephone 9796-1066 today to enrol or contact us here.