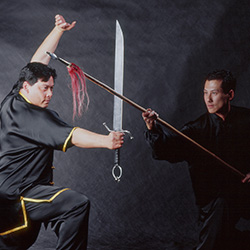 Weapons training in Chinese Martial Arts offer many advantages that contribute to the learning of kung fu and self defence, in particular defending against a weapon at home or in the street.

Most styles of Chinese martial arts use a variety of kung fu weapons. But not all schools teach weapons these days. In fact, Golden Lion academy is the last remaining school that regularly teaches a wide variety of weapons. So if you’d like to learn the ancient art of kung fu weaponry, join us today.

There are 18 main categories of weapons in kung fu, consisting of saber, spear, sword, halberd, axe, battle axe, hook, fork, whip, mace, hammer, talon, trident-halberd, cudgel, long-handled spear, short cudgel, stick and meteor hammer. Different variations within each category make up the hundreds of weapons used in Chinese martial arts. However, not all of these weapons are used nowadays as a learning tool.

The grace and beauty displayed in a weapon routine has been very popular among the performing arts. Many weapons are displayed in the Beijing Opera, in movies and in the successful Shaolin Wu Shu live stage tours around the world. 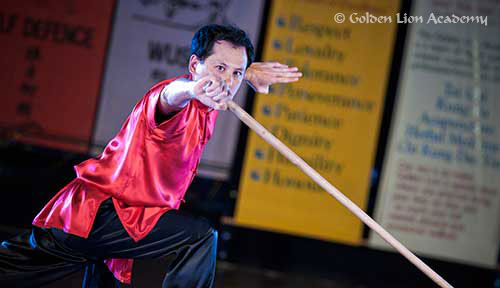 Students learn about the range, timing and distance needed in order to be able to defend effectively and safely against a weapon attack. This makes the student more efficient at defending themselves in the street or at home while keeping at a safer distance.

The weight and length of a weapon such as the cudgel, spear or halberd contributes to the building of force and power that a student will need behind a bare hand technique. Strength is also built in the upper body while encouraging the maintenance of balance through the use of good stances.

Shorter weapons like the twin sticks, saber and swords improve speed and agility, focus and coordination. These weapons were easier to carry when not on the battlefield and were practised by many people such as Shaolin monks, Taoist priests, Officials of the Imperial court, Scholars, Ministers and Villagers alike.

The physical conditioning and mental focus provided by weapons training led to the development of many routines and styles for each of the weapons. Many traditional routines are still practised with a large variety of new routines being developed for modern competitions. Most weapons use the Seven Training Tips For Kung Fu Weaponry as a guideline for training. See our Blog for more articles. 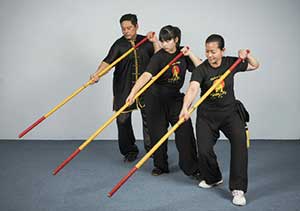 The first and most basic kung fu weapon is the cudgel (also known as the pole or stick). It was first used by Shaolin monks because they were not allowed to carry weapons. The cudgel was originally used to carry two water buckets across the shoulders — though any long stick can be used e.g. broom handle, fence post, stick, tent pole etc. So you can see how learning the staff can help you use a broom handle at home to defend yourself.

The cudgel provides distance for safety which is most important for a beginner in self-defence, and the length of the weapon makes it easy to generate power. The beginner skills learnt through the first, second and third levels are developed later at the black belt level through learning the internationally recognised Routines.

You can start to learn the cudgel or staff with our Shaolin Cudgel Training Instructional Workbook. It is available here on our secured website. 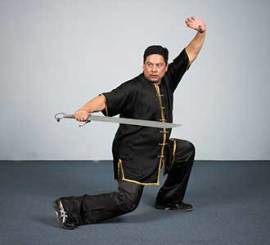 At the intermediate level of 4th and 5th levels, students are introduced to the first short range weapon, the Southern Broad Sword or Nan Dao. This Broad Sword is unique among the short range weapons because it can be used with one hand for speed and distance as well as two hands for control, strength and power.

The Southern Broad Sword allows students to defend themselves at close to mid range against all long range weapons including the cudgel, spear and long handled swords (such as halberds), this makes it more versatile than the thinner, lighter straight sword.

When students reach the advanced level of black belt they begin by refreshing their skills with the cudgel and continue to learn more difficult techniques and combinations such as twirling, rapid strike combinations and jumps while developing their power.

Students also develop their skills with short weapons by learning the International competition routine for the Southern Broad Sword as well as the self-defence applications against another sword or cudgel.

The advancement of the student past the black belt level gives them the opportunity to learn an elective routine which can include many weapon routines of traditional and modern origin, such as:

Contact us today or Call us on 9796 1066 for a free introductory trial class.