Wu Shu and Kung Fu’s Southern Fist: Is there a difference?

Kung Fu is a more widely known name for wu shu in the western world. Wu Shu is a general term in Chinese that means martial arts. However, there are different types or styles of wu shu. Generally, there are two types of wu shu, the Northern style and the Southern style. The type practised at the Golden Lion is the Southern Style or Southern Fist, internationally referred to as Nan Quan Wu Shu. 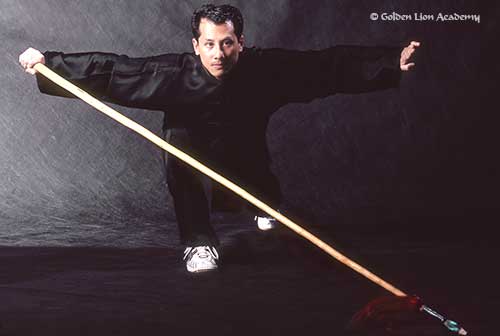 China’s Yang Zi River traditionally separates the country into two regions: north and south. The styles that are used north of the river are called Chang Quan or Long Fist styles, while those of the south side of the river are identified as Nan Quan, which means Southern fist when translated from Mandarin Chinese. 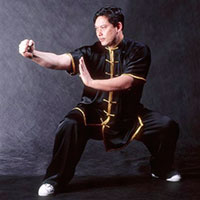 Nan quan is a very powerful and intense form of southern wu shu, and like the other styles, has its own unique weapons and forms.

Please note that only some of these styles can compete in wu shu tournaments. The Hung Gar or Hung Kuen style is the main “mother” style used as a basis for all the techniques in Nan quan. It is also referred to as Southern Fist. At the Golden Lion Academy, you learn this style of kung fu. Other styles of kung fu are not equipped for international wu shu competitions.

The second definition refers to only the contemporary Nan quan. It was developed as part of the new Chinese National sport of Wu shu following the founding of the Peoples Republic of China in 1949.

For westerners, Nan quan is a central part of the martial art sport of wu shu, which is divided between sparring called Sanda and forms competition called Taolu.

Contemporary Nan quan is the modern collection of the five great fighting styles of Southern China. As a part of wu shu, Nan Quan is represented in 3 of the 10 form events in the sport, Nan Quan (Southern Fist), Nan dao (Southern Saber) and Nan gun (Southern Staff).

Nan quan southern style of kung fu has the characteristics of low, stable stances from which strong arm movements and combinations covering all ranges of attack and defence can be launched. 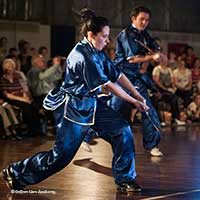 The concepts of attack and defence are combined so that the blocks are delivered in a powerful and fierce manner to represent self-defence or fighting situations.

A unique form of simultaneous attack and defence called bridges (qiao) is common in Nan Quan, where the forearms are used at diagonal angles to create both a block and strike.

The forms put emphasis on the use of power, speed and stability, and the movements reflect those of a tiger through being powerful and aggressive.

While maintaining solid stances, a high level of mobility is required during the many low stances. Nan Quan concentrates more on arm and full body techniques, with less emphasis on the high, acrobatic kicking that can be found in the Northern wu shu.

Other important factors in kung fu wu shu world tournaments are clarity of movements, rhythm, and spirit that must be displayed in the routines. Fitness of course is also an important consideration. Physical fitness as well as mental fitness is necessary.

If you’d like to learn Nan Quan Wu Shu or have the ability to participate in local and international tournaments, please call 9796 1066 for more information or email us through our contact-us form.

More articles can be found on our Blog.