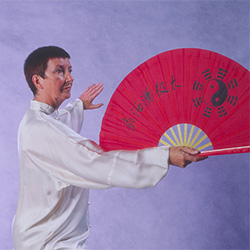 Tai Chi weapons training at the Golden Lion include a variety of weapons such as the:

In ancient Chinese culture, the folding fan (shan) was a very versatile implement. It could be a practical cooling tool, a decorative accessory, a signifier of status, a piece of artwork and, of particular interest to wushu practitioners, a subtle but deadly weapon. The fan was able to be carried in places where a more obvious weapon, such as a sword, could not. It could be concealed in the flowing sleeves of courtiers, students and ladies.

Fans were part of the social status for the Chinese people. A particular status and gender would accord a specific type of fan to an individual.

Fans that were used as a weapon, called the Iron fan, or tie shan in Chinese, were made with metal spokes with sharpened ends so that they could be used for cutting. The blades could also be used to deflect a weapon and, closed, the fan could be an instrument for striking vulnerable points such as eyes, special pressure points or acupuncture points.

The movements in a tai chi fan routine are strong and flexible, defensive and aggressive, full of elegance and beauty and the impressive power of martial art.

Fan routines seem to lend themselves to being performed in groups, and the fan’s more compact nature compared with other tai chi weapons forms makes it particularly suited to modern times. Many of the moves are familiar from the empty hand, sword form and especially the sabre or broadsword form but there is the extra factor of the snapping open and closed of the fan.

The main distinguishing feature of fan practice is not the forms in themselves, but instead the skill of being able to connect the work of a fan with your body work, so that practising fan routines gives a special opportunity to develop coordination and timing of body movements with hand and eye work. 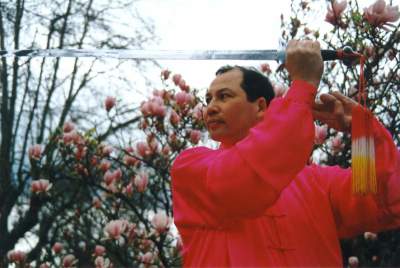 A Tai Chi Sword routine may seem like a contradiction. How can this ancient art ‘known for its peaceful, flowing movements’ have a routine involving the sharp, slicing blade of a sword? Of course, routines using traditional tai chi weapons come from its history as a martial art and a health practice.

When tai chi was taken up by the aristocracy of China as a health promoting exercise, the use of the sword was refined into the elegant and graceful forms we see today, and is now often referred to as the ‘Gentleman of Weapons’.  Movements are light and nimble and the flexible blade is used to deflect and re-direct blows.  The sword becomes as an extension of the arm and the agile wrist movements become almost like painting calligraphy.

In the hands of a trained practitioner, tai chi sword forms are a study in grace and beauty, but the underlying power within the shimmering movements of the sword cannot be disguised.

A “singing blade” sounds like a fanciful notion, something out of a movie with epic, magical battles, tragic love and exiled royalty. However, students learn how to send their energy down the length of the sword, making the metal resonate with certain movements.

There are two main sword types and 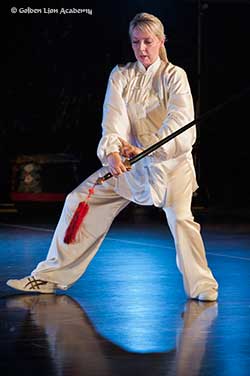 sword routines that we make use of. There is the straight sword, or “jian”, with a long, flat blade, and there is the broad sword or Sabre.

The straight, narrow-bladed, double-edged tai chi sword, or the Jian, was originally a genuine battle weapon.  Because of its subtle and precise nature, not requiring great strength to wield, it was traditionally seen as being appropriate for women and scholars to use.

The straight sword is usually adorned with a coloured tassel hanging from the pommel at the end of the hilt; not just for decoration, the tassel can be used to distract an opponent, or even blind them.

The Tai Chi Broadsword or Sabre 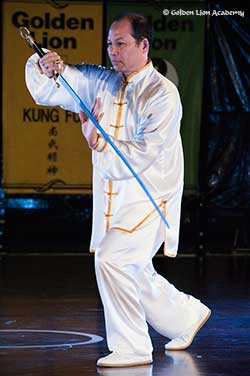 Of course, these swords are for martial arts use only and do not carry a sharpened edge in practice. All students of Golden Lion receive a letter authorising them to possess and carry their weapons to class, to ensure compliance with Victorian law.

Golden Lion teaches many different Sword Forms, both traditional and modern: from the 16, 32 and 42 modern sword routines, to the Yang-style sabre forms.

The principles of Tai Chi apply equally to sword forms as they do to bare hand routines. The requirements remain the same: the ever-changing distribution of weight across both feet, keeping the body erect, and maintaining a slight curve in legs and arms at all times.

Balance remains of key importance, although beginners often find the weight and length of the sword difficult to manage to begin with. The sword appears light when first picked up, but maintaining control while twirling and thrusting the length of metal requires great strength and flexibility in the wrist, which develops over time and practice.

The elegance of the sword routines amply reward the patience, time and effort that go into mastering this “weapon of scholars and courtiers.” 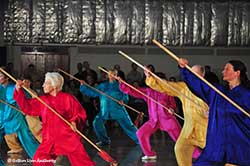 In Chinese martial arts, including tai chi chuan, the spear (in pinyin qiang) is considered to be “the King of Weapons”, requiring superior experience and expertise. For this reason, it is usually taught after the student has trained for a considerable time, and has a good level of skill and control in barehands tai chi and other tai chi weapons.

The spear is classified as one of the ‘long weapons’ of wushu. It’s length can range from around 2 metres to as much as 6 metres. The standard length for competition today is from the floor to the tip of the user’s fingers when the arm is stretched vertically above the head. This is the length recommended by Golden Lion’s instructors for their students, as it can be safely used in practice while still showing the elegance and deadliness of this weapon.

Yang Lu Chan (1799 – 1872), the originator of Golden Lion’s “home” style of Tai Chi received his tai chi training from the famous Chen family grandmaster, Chen Chang Xing. However, as he was already an expert with martial weapons, including the spear, from other styles of wushu, the training was only in hand fighting and forms. Yang Lu Chan, himself, developed spear techniques, using “internal” principles drawn from his Chen-family training but only taught them to his sons and a few close students.

It should be noted that, at this time there was no such name used as “Tai Chi Chuan” so Yang Lu Chan never used this name for his art.

The story goes that Master Yang often taught spear movements using a staff, so that his students could practice fighting techniques safely. There is another story that a son, Yang Ban Hou, was so violent and reckless with his spear training that he was causing damage to people and possessions around the home, that his mother cut the blade of his spear and he could only practice with the shaft, which then became a cudgel. Whatever story, it is true that Yang family spear and staff techniques are one and the same.

Would you like to learn these tai chi weapons?

If you’d like to learn the art of tai chi weaponry, please call us today on 9796-1066 for a FREE TRIAL CLASS , or email us through our contact-us form.

More articles on tai chi weaponry can be found in the Blog, for example, the article about Tai Chi Sword and Jedi Warriors: Apply Within.