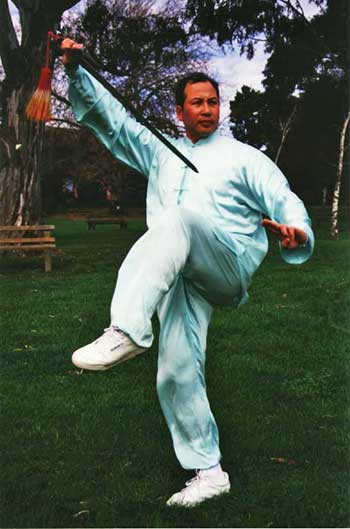 In recent years there have been many tai chi scientific studies performed to determine its benefits. These studies have shown that tai chi is beneficial for the mind and body.

Below are some reviews of evidence for the health and healing benefits of Tai Chi Chuan as recognised in Western medicine as well as the additional health benefits identified in Chinese culture.

As more scientific studies become available, we will offer them in our Articles section. Summary of other studies are offered in the tai chi benefits page.

From a Western perspective:

As a health exercise, Tai Chi techniques can be seen as a system of slowly flowing movements and shifts of balance that strengthens the weight-supporting muscles while conditioning the tendons and ligaments of the ankles, knees, hips and spine. This increases their range of movement and makes them more resilient, less prone to injury. The constant weight shifts train balance and body awareness, leading to confident ease of movement within the forms and in every day life.

This is a physical exercise that focuses the mind while conditioning the body. It can help to dissipate stress and therefore reduce stress-related debilities, increase stamina, and strengthen the body and will.

Proper performance of the techniques places certain demands on the body: the sinking of the weight, over time, sends signals to the tissues of the legs to add muscle and bone mass.

The turning of the trunk flexes the spine, producing improved spinal flexibility, release of tension in the muscles around the spine, alleviating imbalances that can lead to back pain while improving blood flow to the discs.

The techniques conditions the Psoas muscle, a deep muscle of balance and posture that underlies the lower abdominal organs and mediates the relationship of the spine to the pelvis and legs.

To review the health benefits of practising the exercises which are recognised in Western medicine:

Tai Chi techniques provide health benefits beyond those studied as yet by Western medicine.

In Chinese philosophy and medicine there exists the concept of ‘chi’, a vital force that animates the body. One of the avowed aims of Tai Chi is to foster the circulation of this ‘chi’ within the body, the belief being that by doing so the health and vitality of the person are enhanced. This ‘chi’ circulates in patterns that are closely related to the nervous and vascular system and thus the notion is closely connected with that of the practice of acupuncture and other oriental healing arts.

The techniques condition the sleeves between muscles and nerves, the webs that separate and support the organs, the fascia. The Chi meridians run through the fascia. By conditioning these boundary layers between tissues, the exercises reduce chemical cross-linking, cellular “rust”.

While Chi Kung is not Tai Chi, one of the many attributes of Tai Chi is that it is, amongst other things, a form of Chi Kung. As such, by using correct breathing and mind intention with the movements, health work can be done with Chi. Chi may be directed to a particular part of the body to assist healing there, or it may be moved through the body, eliminating stagnation, smoothing turbulence and increasing flow. Attention can be given to stimulating particular points so as to assist in balancing Yin and Yang Chi.

The turning of the body, in conjunction with deep abdominal breathing, “wrings-out” the organs. This flushes blood out as organs are compressed and allows fresh blood carrying nutrients to flow in when the movement moves on to compressing another part of the torso. This compression and release reduces pockets of stagnation in the various organ systems.

To gain the most fitness and health benefit from the tai chi scientific studies, it is important to practise regularly and frequently. An exercise program suitable for most people’s needs can be designed around its use as the central component.

More articles on Scientific Research can be found on our Articles page, which is regularly updated to give you the latest research results.

In May 2008, the Golden Lion Academy was asked to participate in a pilot study investigating the question ‘Does Tai Chi delay cell ageing?’

There has been a great deal of anecdotal evidence which has indicated that tai chi players live longer and healthier lives than non players. This major traditional Chinese exercise has been shown to be effective in improving the health-related quality of life in aged populations and patients with arthritis and diabetes. Tai chi has been used in falls prevention programs with some success. However, the scientific evidence and mechanisms of this practice at the level of the cells in the body is unclear.

The investigators, Professor Andy Choo, Dr Veronica Collins, Dr Hua Ren and Dr David Thorburn from the Murdoch Childrens Research Institute, located at the Royal Children’s Hospital aim to investigate the mechanisms of tai chi practice and its effect on the ageing process. They aim to provide a better understanding of the scientific basis of the effects of tai chi at the cellular level and thus offer a greater scientific confidence in using tai chi to promote health. Fiona Clay, the project coordinator contacted Master Si Gung Charles Tsui-Po to invite the Golden Lion Academy instructors and students to be part of this project.

The researchers’ aim is that at least 400 adults will eventually be involved. The participants are members of the general public aged 30 years and over who are either long-term tai chi practitioners, are just starting to learn tai chi or who have never done tai chi. They will come from many tai chi centres in Australia, in addition to those from the Golden Lion Academy. A number of the tai chi instructors and a large percentage of the Golden Lion students consented to take part in this study.

In order to measure the changes or activities of cells that may be related to tai chi practice, the researchers required a mouth wash sample from each participants. Initially, two tests will be done on this mouth wash cell sample. The first is to measure the end sections of chromosomes called the telomeres. A chromosome is a rod-shaped element of the cell that appears in the nucleus as cells divide. There is some evidence that telomeres get shorter as we get older and perhaps when we get sick with certain conditions such as heart problems. The second test is to look at measures of the energy production of the cell, in a part of the cell called the mitochondria. The mitochondria and its function can be affected by stress in a person’s life and this might be helped by tai chi practice.

Each participant was also asked to complete a questionnaire. This information will be used when analyzing the laboratory data. The purpose being to identify the changes in the cells as being related to tai chi practice itself, rather than being related to other aspects of the participants lifestyle or health. Si Gung Charles Tsui-Po supported this research because although he understood that there may be no immediate benefit to his students, because it is a new exploratory area of study, however, he believed that it is important to contribute to building a body of scientific knowledge about tai chi practice and how it affects the body and health.

Additionally, as tai chi is a non-pharmacological activity with very few side effects that is often used to help with health conditions, knowledge gained from this study, and other related studies, will provide a better understanding of the scientific basis of this practice. This will mean that people will have greater confidence in using tai chi to improve health-related quality of life in the general community, as well as for specific health conditions. The study may also lead to more emphasis being given to tai chi as a health-promoting activity and for improving certain health conditions.