The history of kung fu below includes the Shaolin 5 Animals style of kung fu while philosophy looks at the Tao of kung fu and how it is applied to daily life. 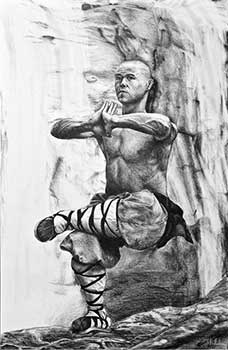 Kung fu – ‘kung’ meaning ‘energy’ and ‘fu’ meaning ‘time’ – is a Chinese martial art whose recorded history dates back to around 525 AD, during the Liang dynasty. The man credited with introducing martial arts to China is said to be an Indian monk known as Bodhidarma (who is also known as Do Ma or Buddha, 506–556 AD).

Bodhidarma had devised a set of ’18 movement exercises’, which are also known as the ’18 hands exercises’; he taught these to his disciples in theShaolin temple, believing that the development of a strong body would prevent the disciples from falling asleep during meditation.

The ’18 movement exercises’ had their origin in techniques formed and developed in the Himalayas; they were designed in such a way that daily practice of these techniques would strengthen and improve the health of the disciples.

These techniques were later further developed, and became known as Chan (which was also know as Zen Bhuddism) and Shaolin Wu shu (which is also known as Shaolin Chuan Fa or Sil Lum Wu shu or Sil Lum kung fu).

Before Bodhidarma taught his ’18 movement exercises’ in China, there was a fighting and healing style already practiced by Hua Tuo, doctor of surgery and inventor of anesthesia. It is this traditional system that is taught at the Golden Lion Academy.

800 years after Bodhidarma’s death, during the Yuan Dynasy (1260 – 1368), a monk named Chuan Yuan (nee Yen) and two famous boxers from the Shansi province, Li Cheug and Pai Yu Feng created a new system of kung fu, believing the original one to be unfinished.

They divided the martial art into five styles, based upon animals; Dragon, Tiger, Crane, Leopard and Snake. This was known as Ng Ying Ga, or Five Animal Style – each animal complimented the others, and yet still maintained its own unique characteristics.

History of Kung Fu and the Shaolin Five Animals

The union of the five animal forms (dragon, tiger, crane, leopard, snake) clearly displayed the efficacy of both hard and soft movements, of both internal and external energy – this form of Chinese martial arts was known as Shaolin Kung Fu, named after the temple in which it was developed.

The Manchu invasion of China in 1644, along with the establishment of the Ching Dynasty, led to the destruction of many temples, including Shaolin. And yet although the monks were forced to flee to other regions of China, they nevertheless continued to teach, revise and modify the forms and techniques of their own system of martial arts; the monks’ styles therefore evolved as each monk placed emphasis upon their own speciality.

The geographical separation of masters and students also resulted in the creation of more styles due to each teacher’s preference of techniques, a preference that depended upon the teacher’s needs, abilities and physical environment. These various styles have now spread throughout the world, forming the wide variety of martial arts styles that exists today.

Nowadays, some styles are even referred to by the names of the people who have promoted them or who have promoted a particular ‘brand’ or ‘flavour’ of martial arts; for example, Jackie Chan kung fu, Bruce Lee kung fu, David Carradine or Jet Li kung fu.

Although this is not incorrect, the practice of naming styles after their inventors were also present in ancient China; for example, the Hung style (Hung Gar or Hung Kuen or Hung Fut) was named after master Hung, the founder of the style.

The Shaolin 5 animals style of kung fu is a southern style of Chinese martial arts, its techniques are briefly:

Tiger: Exercises to strengthen the bones. Read more about the Tiger and Crane in kung fu.

If you would like to learn these animal moves and attend regular classes, please call us now on our central telephone 9796-1066 for class times and fees or email us through our contact-us form.