The key to success in dim mak is to study meridians and charts because most (not all) pressure points fall on meridians, which are energy pathways that interconnect all areas of the body. These are the same meridians as those used in Chinese acupuncture, the points are shown on meridian charts. 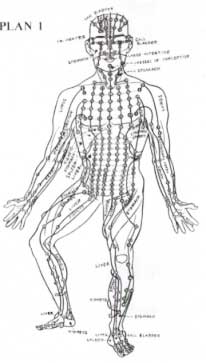 Meridians are channels that move Chi, blood and fluids around and through the entire body. They are not physical entities like nerve endings or veins, rather they are energy fields that makes use of some veins, arteries, nerves and other physical structures that are present within the body.

These meridians are unable to be felt by those who are not trained in this art, but we can study and learn where they are, map them if you like, onto the human body, and from here plot or chart the pressure points that fall at various places along these meridians.

Each channel of energy needs to be understood and charted in a variety of ways: it’s location, the way that energy flows through it, it’s direction, it’s type, and whether it lies superficially on the body or deeper into the body itself.

There are twelve principal bilateral meridians, the first meridian in the energy cycle is the Lung meridian. The Lung meridian runs from the shoulder to the tip of the thumb and this pathway includes eleven points that are relevant to dim mak pressure point fighting.

Points are numbered in the direction of energy flow. So if you are aware of the placement of any two points along the meridian they are also able to determine the energy flow along this pathway. To illustrate, let’s look at an example. 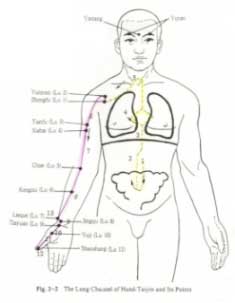 In the case of the Lung meridian, energy flows from the shoulder down to the thumb, the first point of interest then is at the shoulder point, while point number 11 falls at the tip of the thumb. Point Lung 1 is of special interest to us in pressure point defence.

In using the points along the Lung meridian effectively in a self defence situation, the Counterflow Technique can be used to reverse the natural flow of energy, the symptoms that arise after the point is struck will indicate whether the damage done has affected the internal or the external meridian, or both.

There are a range of symptoms that may indicate that the Lung meridian has been affected, these include problems arising from either a deficiency or excessive state of energy along this meridian. If the damage is related to the external course of the meridian, symptoms may include nasal congestion, chills or fever and sensitivity to cold, headache and pain in the upper body.

Not all of these symptoms may be present, and other symptoms may also be present depending on whether the point struck is also a juncture of other meridians or vessels.

Overall, meridians and charts also tell us why dim mak pressure points for self defence work in the way that they do. For a full and deeper understanding of the meridian system, Counterflow technique and the Lung meridian itself, you can refer to my “Dim Mak Manual – The Art and Science of Deadly Pressure Point Fighting” for further information.