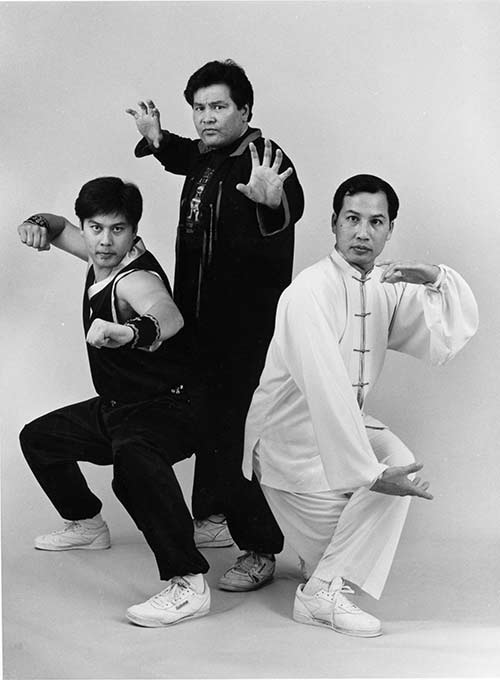 Martial Arts Melbourne flourished when Dr Pier Tsui-Po founded the Golden Lion Academy in 1971 in Melbourne, the capital city of the State of Victoria, Australia.

In those formative years of Golden Lion, Dai Sifu Pier Tsui-Po was one of the first few, if not, the only instructor in the Western world who dared to teach traditional kung fu to non-Chinese in Melbourne.

By the mid-1980’s when brothers Charles and Richard Tsui-Po completed their training under Pier, they expanded the programmes offered by the school. The original name was changed to Golden Lion Academy and the three brothers became owners and operators of the academy.

Their nephew, Steeve Kiat, emigrated to Australia in 1983 to further his training under Pier and Steeve later join his uncles as a martial arts instructor.

Since 1971, the Academy has grown to become one of Australia’s leading institutes for the teaching of Kung Fu, Tai Chi, Wu Shu, Dao Yin Chi Kung and Dim Mak Pressure Points. Together, an acupuncture and Chinese herbal medicine clinic is offered.

In 1987 an international bi-lateral agreement was established between the Golden Lion Academy and China’s Tianjin Sports Institute. This provided facilities for exchange of students and instructors with the institute. Golden Lion students and instructors now also regularly train with the world famous Beijing Wu Shu Institute, Beijing University of Physical Education and with other eminent Grandmasters throughout China.

The Golden Lion Academy is a long standing member of the Martial Arts Industry Association Limited (MAIA), Kung Fu Wu Shu Australia (formerly AKWF, the Australian Kung-Fu Wu-Shu Federation), and the Tai Chi Association of Australia (TCAA). In fact, in 2012, Charles Tsui-Po was given a life-time achievement award by the AKWF-Kung Fu Wu Shu Australia for his long years of dedication and in developing Chinese martial arts in Victoria. It was only the second-ever Lifetime Achievement Award bestowed by the national organisation and the first ever given in the State of Victoria.

The academy’s instructors, employees, affiliates and members are bound by the ruling code of ethics of these organisations, including the National Code of Practice for martial arts centres and instructors of the Martial Arts Industry Association Limited.

All instructors of the Golden Lion Academy are fully trained, accredited and recognised coaches of the Australian Government’s National coaching accreditation scheme (NCAS), a programme overseen by the Australian Sports Commission. They all have Working-with-Children endorsement. Our senior masters are all China-endorsed teachers.

In addition, our instructors are also required to regularly update their coaching training, which includes specific in-house training programmes to ensure that they develop and maintain the key competencies of sport coaches and officials, and are able to provide instruction in a manner that is safe, responsible and accountable.

The Tsui-Po brothers, Dr Pier Tsui-Po, Charles Tsui-Po and Richard Tsui-Po, warmly welcome you regardless of age and creed, confident in the knowledge that Golden Lion courses will give you new friendships, long term well-being and health benefits. They also offer special programmes for children, teaching them the discipline and determination skills they need to succeed at school and in later life.

Through their success in many local, state, national and international competitions, together with their dedication to the martial and healing arts over many years, the Tsui-Po brothers have built the Golden Lion into one of the most respected martial arts and healing centres in Australia.

For you to benefit from our martial arts Melbourne programmes and to progress from beginner to advanced level, you’ll require teachers with an impeccable pedigree. Masters of the academy are highly qualified individuals with very long experience in their field, both in Australia and in China. They are humble and patient. They teach every aspect of their art thoroughly, precisely in every detail. They are an inspiration to the art they teach and they impart to you quality knowledge that is authentic.

The extensive experience and authentic knowledge of the Tsui-Po brothers have been forged by their courage, dedication, and the continuous delivery of classes since 1971. This long history of Martial Arts in Melbourne teaching Australians have made them a reliable and much sought-after professional teachers in the martial arts industry today.

For class times and fees, please call us on our central telephone number 9796-1066 or email us through our Contact Us form.