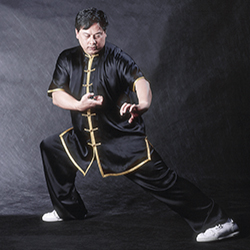 Traditional training in kung fu at the Golden Lion includes special routines or forms and special exercises such as forearm conditioning, Iron palm, Iron wire form, chi internal breathing and meditation routines. These are important exercises that will benefit your mind and body; they will also improve your internal strength and mental focus.

Traditional kung fu exercises at Golden Lion incorporate special breathing techniques and meditation, they give additional benefits such as decreasing stress, relieving anxiety and depression, decreasing pain and insomnia, and increasing the quality of life. Memory is improved, attention and focus is enhanced and emotions are regulated. 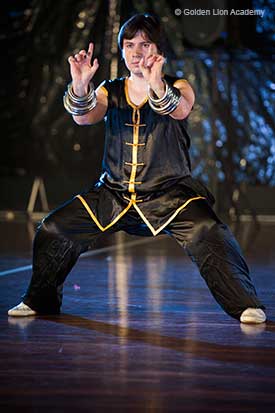 In traditional training such as kung fu conditioning, martial arts practitioners throughout the centuries have heard many stories of great Chinese martial arts masters with the ability to withstand powerful blows and generate superior strength in their attacks.

Leung Kwan was also remembered for being one of the untouchable Kwang Sup Fu (Ten Tigers from Canton) during the Ching Dynasty. During battle he would defeat his opponent by crushing his forearm into various pressure points.

What made Leung Kwan so powerful?

Kwan spent countless hours in traditional training to develop his Kiu Sao and breathing form such as the “Iron Wire Routine“. The level of skill and power he attained can only be achieved through extensive forearm conditioning over a long-term period.

Kiu Sao is also referred to as “bridge arm”. The bridge arm is located from the elbow to the tip of the fingers. To those confronted by the sheer strength and power in these strikes and blocks, it felt as through their opponent had forearms of iron. This feature quickly became the trademark of the style. The Kiu Sao is an integral part of all bare hands forms practiced at Golden Lion.

Conditioning the forearms in kung fu

Traditional training of the forearms consists of various hardening drills and breathing forms, the purpose of which is to help you develop hard bone, power and resilience to pain. Below are three most common training exercises to strengthen your forearms. But please make sure you apply Golden Lion’s Iron Palm or Bruise Gone liniments. 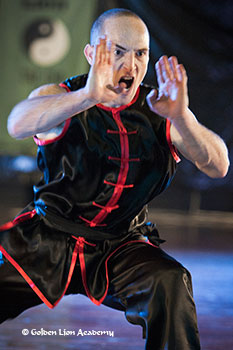 In traditional training, correct breathing is necessary to develop internal strength. When performing these three exercises, breathe naturally in through your nose and out through your mouth slowly to increase the flow of Chi in the body.

It is said that the impact from a Hung Kuen stylist’s block is to be feared, let alone the impact from one of his strikes. Training designed to build forearms of iron not only creates a destructive weapon but also provides you with a high level of protection and increases for your fighting tools – hence the term “iron forearm”

The kung fu conditioning exercises introduced here are only some of the different methods that can assist you to develop the famous iron forearm and are more complex than they appear. Forearms like iron can only be achieved through long-term training under the proper supervision of your teacher.

Self healing and kung fu

In traditional training, there has always been a link between self healing and kung fu. Apart from having developed and refined the ancient wisdoms, the mental skills, attitudes and nutrition necessary for a strong and healthy body, the martial Taoists also developed a series of internal exercises that specifically build Chi power so that you can prevent illness, build a strong mind and body, and promote balance and harmony of mind, body, emotions and spirit.

The main aim of Kung Fu Chi Internal Power Development in Chinese Martial Arts is to build a strong healthy body that can prevent and fight off illness.

Learning our Chinese martial arts involve more than just the fighting or self defence aspect of the art. It includes learning the mental attitude necessary to obtain, and maintain, a healthy and happy life. There are also living and health skills that you need to learn. Because training enhances your personal growth, our curriculum also include these skills.

The “Way” is a way of living, thinking and being. Ancient Taoist practitioners, who were the very early practitioners of martial arts such as kung fu, tai chi and dao yin, discovered that the wisdom of the martial art forms the basis for life, living, health, fitness and personal growth. It also includes the ability to communicate with other people. As you know, communication is not done verbally; Chi energy is also used in communication.

A series of Taoist mind and body exercises as well as the ancient Taoist healing exercise of Dao Yin Chi Kung have been used in traditional training, in both kung fu and the healing arts. These internal exercises specifically use a selection of vital pressure points on the body that are known to influence health and healing. They promote good physical, mental and emotional health.

If you would like to attend regular classes, please call us on our central telephone number 9796-1066 for class times and fees or email us through our contact-us form.

More articles on traditional training are found on our Blog.