You’ll find below the recent results of various local and international tai chi tournaments or competitions that Golden Lion students have successfully won medals and trophies. By way of introduction, here’s a brief account… 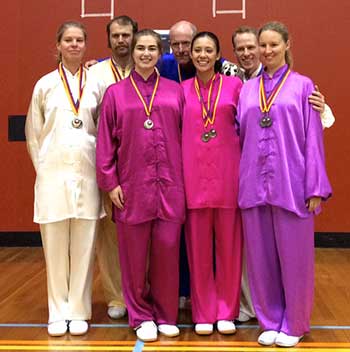 Having never competed in anything before it seemed surreal changing into my shiny new silks and walking out with all the other competitors for the opening ceremony of the WTPA competition. That 45 minutes of careful ironing of the silks (special uniforms) went down the drain in about 10 seconds flat.

During the warm-ups there were fleeting thoughts of “this floor seems slippery” and “goodness the judges table is awfully close” followed quickly by “what if I accidentally take them out with my horizontal slice?”

Just as all that tension started to bubble, my fellow Golden Lion team mates came to the rescue full of reassurance, encouragement and support. And that pretty much sums up the tone of the event; individual competitors competing as a team, and it was a wonderful privilege to be a part of it.

In tai chi tournaments, I love watching everyone else do their routines as much as I could keep track of both performance arenas. I wonder if I will ever be able to make it look that effortless? I also glimpsed some of the kung fu wushu performances, and man they looked amazing. It did confirm that Tai Chi was definitely the right choice for me though; I wouldn’t be able to do those kicks and jumps in a million years. I knew I had all the time in the world to improve my leg strength, flexibility and overall Tai Chi technique in the future. My goal for today was simply to get through the routines and keep my balance.

Finally it was time for me to go on the floor. I was lucky enough to do the 24-form with Melissa, so it almost seemed like a usual Friday night class at Rowville. Nerves under control? Check. Sort of.

My sabre -sword routine however, was performed solo, all by myself, one little duck on the floor all on my own with everyone watching. Nerves under control? I don’t think so! Who knew a sabre could wobble so much? But I think I did manage to keep my balance in the one leg stands so I was happy. Plus I was showered with hugs when I’d finished which wasn’t too bad either! I left the day feeling exhilarated, completely exhausted, and it wasn’t until the next day I realised I should have done a lot more stretching afterwards.

I would really like to thank Si Gung Charles for offering me the opportunity to compete in tai chi tournaments, and of course for helping prepare me both physically and mentally all year. Since joining both the Gradings and Competition classes I feel like I’m starting to learn what Tai Chi is really about.

Also a huge thank you, of course, to Si Jie Darlene (now Sifu Darlene)  and all the other Si Jie’s and seasoned competitors who are always so lovely and supportive. Now that my first competition is out of the way hopefully I can lean more towards relaxing and having fun on the floor. I guess I’ll find out next time!

If you are interested in training tai chi for tournaments, please call us today on 9796-1966 or contact us here.

(Our Blog contains various articles on these tournaments)

2 Kung fu students win a Bronze and a Silver medal

.Students of Golden Lion Outright Winners in both these competitions