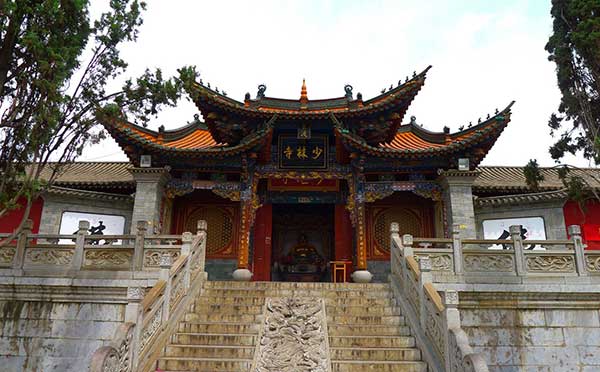 Can the development of kung fu and the birth of the martial arts be attributed to the various Shaolin temples of China?

According to the manual script Continued Biographies of Eminent Monks (AD 645) by Daoxuan, the Shaolin temple was built in the 20th year of the Taihe era of the Northern Wei Dynasty in AD 497. The temple obtained its name Shaolin which means “young forest” for the reason that it was built in the forest of the Shao Shi Mountain, which was regarded as a sacred place in China.

Bodhidarma (also known as Da Mo) an Indian monk, during his travel across the Himalayans, became aware of the Shaolin temple, and seek refuge but was discarded, by the head Abbot Fang Chang. Do Ma took shelter in a nearby cave and meditated for years.

Legend has it that Do Ma bored a hole through one side of the cave with his constant gaze. When the head abbott Fang Chang learnt about Do Ma spiritual prowess, he invited him to join the temple.

When Do Ma enlisted in the temple, he noticed that the monks were not in good physical condition. Do Ma taught them a series of moving exercises from Indian yoga. With daily practice, these exercises were designed to strengthen and improve the health of the disciples. His teaching was further developed and became known as Chan (Zen Buddhism) and Shaolin Kung Fu.

Although Do Ma has been credited with introducing martial arts to China, many other forms of fighting skills had already existed there long before he arrived. As time went on, the Buddhist teaching became less significant, instead Shaolin Kung Fu took priority, due to constant attack on the temple by bandits.

During the Yuan Dynasty (1260-1368), the head of the Shaolin Temple recognised the martial arts skills of the monks were lacking in some aspects. He invited a group of external martial arts experts around China, to share their skills and that of the doctrine of the Shaolin Boxing manual.

The external masters after many years of training pointed out that the exercises documented in the Shaolin Boxing manual were too long, tedious and complicated. Subsequently, they devised a new fighting art known as Shaolin 5 Animal styles. Following the completion of the new style some of the external masters remained in the temple, some became known as the famous ten tigers of Shaolin, while others travelled to other Shaolin temples in China.

There were 5 main temples at the height of the Shaolin command, although all 5 were rarely active at the same time.

Henan Temple: This is “the” Shaolin temple seen in Chinese kung fu movies, and the one portrayed in the TV “Kung Fu” series of the 1970s starring David Carradine.

The physical premises, located in Loyang, a small mountain town southwest of Beijing, have been restored by the Chinese government in the mid 1970s. Subsequently, this temple has now become a tourist attraction. During most of its history, Henan Temple was the seat of the most senior monks in the Shaolin Order.

Fukien Temple: This was regarded as the snake temple, it was most likely built around the same time as Henan Temple, but originally a mainstream Buddhist temple until the early 1600s.

This temple was integrated into the Shaolin order around 1650. Larger than the Henan Temple, Fukien served as the “command centre” during times when Henan was either destroyed or under threat.

The southern styles of praying mantis and dragon kung fu style were all developed in Fukien Temple, or by its masters. The temple was burned during the Boxer Rebellion, and its remains were rediscovered in the early 1980s.

This temple was built in late 1700’s in a mountain area overlooking the ocean near the city of Canton in Canton Province. This Cantonese temple was close to Fukien temple, and was home to many southern family styles, such as Hung Gar, Lau Gar, Choy Gar, Lee Gar and Mok Gar. The Guangdong temple was destroyed during the civil warring following the Boxer Rebellion.

Wutang Temple: Known as the tiger temple, this temple was located near the town of Wutang, built during the politically unstable time in China.

The Wutang temple was mostly involved with temporal concerns, and consequently often besieged by one army or another. Mercenary monks, including Bok Lei, Hung Si Kuan, and Bok Mei all came from Wutang, eventually moving to Henan (and thus involving Shaolin in its biggest political invasion). It was a very old temple, integrated into the Shaolin order around AD 800.

O Mei Shan Temple: (literally, “Great White Mountain”), northern, library and medical temple. This temple was located in an inaccessible area of the Szechuan province it was used as an institute for medical research. It was integrated into Shaolin order around AD 1500. The buildings were used for artillery practice by the armies of both Shang Kai Shek and Mao Tze Tung, but restored in the early 1970s.

This system of Kung Fu was formed by a monk named Chuan Yuan (nee Yen) and two famous boxers from the Shansi province, Li Cheug and Pai Yu Feng. The method of training was based on the movements of the five animals such as: tiger, crane, leopard, snake and dragon. The union of these five animals styles clearly displayed the fighting competency of the monks.

The 10 tigers of Shaolin were a group of ten of the best fighters in Southern China at the time. Much of their existence has been elaborated in Shaolin Kung Fu movies. The 10 tigers were connected to the Southern Shaolin monastery in Fujian Province which is a branch of the main Shaolin Temple.

The Boxer rebellion in 1901 was the beginning of the end of the Shaolin temples. The five temples were unfortunate victims of war in a land that had abandoned its historical practice of respecting posterity and ancestors. All temples were ransacked and burnt down by various armed groups.

It is documented in texts and kung fu movies that to become a Shaolin monk, their last ordeal was to do battle against a series of wooden dummy in the chambers of Shaolin. If they were successful in defeating the wooden dummy, the monk was able to leave the temple.

The branding of a Shaolin Monk

In ancient times, a distinguished monk in ancient China from the Shaolin Temples would have the brand of a dragon on the left forearm and a tiger in the right forearm. This was a sign that the monk had accomplished his study from the temple.

Today at the Golden Lion Academy in Melbourne, Australia, the Shaolin tradition continues. Apart from teaching the traditional fighting, healing and self defence skills, the valued philosophy of preserving life and living healthily as taught through centuries by Shaolin masters form the backbone of the Golden Lion academy.

If you would like to attend regular classes, please call us on our central telephone number 9796-1066 for class times and fees or email us through our contact-us form.