Watching the recent tai chi gradings and listening to the students make their declaration at the end of it made me think about the words of the declaration. 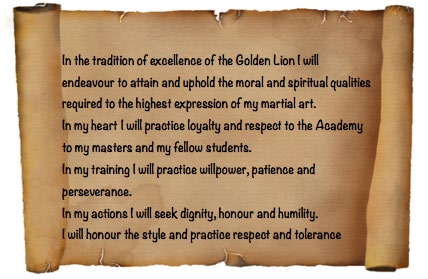 When we are reading this declaration it would be so easy in the excitement of the moment to not fully take on board what it means.

Wude can be defined as martial morals or a code of conduct and is practiced by showing respect for ourselves, the Masters, the Art and our fellow students.

Other examples of how we put Wude into practice include addressing the instructors by their title, saluting when entering or leaving the training floor and at the start and end of class or if leaving class unexpectedly.  Wude is also about having respect for class rules. Wude is demonstrated by the practice of these Eight Qualities.

For grading students, the declaration we make after a grading exam is a reminder and confirmation of our understanding of Wude and a declaration that we will put it in to practice.

Wude is expressed in the Code of Conduct of the Golden Lion Academy by encouraging students to cultivate character, tolerance and honesty. We are also encouraged to conduct ourselves in a righteous and honourable way.  The respect of others is earned through our Wude not our Tai Chi. It is a fundamental attitude that we should maintain at all times.  It is not something we leave behind each time we leave the training floor.  We take it with us.