Mrs Jean Washfold is one of Golden Lion Academy’s veteran golden oldies. She recently celebrated her 90th birthday with a lunch attended by SiGung Charles Tsui-Po and her fellow Tai Chi for Seniors classmates after her tai chi class at Golden Lion’s Berwick academy. 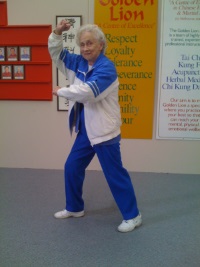 How it all began

At the tender age of 71, Jean was given a membership with the Golden Lion Tai Chi for Seniors as a birthday present from her daughter, Jeanette and son-in-law, Tim, who were both students at the Golden Lion at the time. After overcoming her initial reaction of surprise and self doubt, she decided to take on the challenge. After all, she had just acquired a new car that would enable her to drive from Glen Iris to Rowville for her Monday morning class. She was also going through a ‘recovery’ phase after having nursed her mother for many years.

As her membership approached the end of its 3-month period, not surprisingly, Jean found herself truly ‘addicted’! When the Monday morning class at Rowville ceased a few years later, she was determined to pursue her interest by joining the Wednesday morning class in Berwick, a distance that would take her even further away from home. The rest, as they say, is history.

What kept her going

Jean enjoys good health and attributes this to the many benefits of tai chi. The close friendship with her classmates and the continual ‘coffees and lunches’ that follow after the lesson have become her ‘focal point of the week’.

Jean has learnt several routines more than once. These include the 24, 42 and 48 barehands tai chi forms, the 16 and 32 sword form and the Dao Yin Qigong.

Her advice to potential and current students

It is never too late to start. Persevere with the lessons as tai chi is different from other exercise classes. It takes time to understand what one is doing.

It is obvious that Jean knows how to pace herself. She is proof that regular class attendance and practice are the key points to gaining the maximum benefits for tai chi. 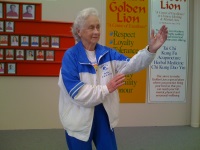 Jean is also one of Golden Lion’s longest serving students, having clocked up 19 years at the Academy. She shows no signs of stopping or slowing down, always raring to go, and has vowed to continue coming to class for as long as she is physically able to.

For those who are not aware, over the years, Jean has been driving all the way from her home in Glen Iris, to Berwick each week. She is especially vibrant and bursting with energy after class that, following a coffee break with her friends, she finishes the afternoon with a round of grocery shopping, before heading home!

Jean celebrated her 90th birthday (which happened to be on Wednesday) after class, with a lunch attended by SiGung Charles and her fellow classmates, and another lunch that weekend, organised by her family.

Jean recently sustained a shoulder injury. Despite this, she only missed a few classes and has since returned. Her son, Ian, knowing how much her classes and tai chi friends mean to her, had encouraged her to resume her classes in the shortest time possible, even if it meant “taking a taxi” for the long drive! She is proud of her almost impeccable attendance record over the 19-year period. Her physiotherapist is very impressed with her faster-than-average recovery phase, to which is attributed to her active and healthy lifestyle.

Jean has just completed learning the Fan routine, which also happens to be her favourite, amongst many other forms she has already learnt over the years. Her short term goals are, to “catch up with the others” for the lessons she had missed, maintain, and continue to improve her skills. She has been described by her classmates as being disciplined, tenacious, focused, humble and always smiling, but one word that comes up often is ‘inspirational’. I make no apologies in using it again here, as she continues to inspire us with her progress in taiji and, more importantly, her attitude towards healthy living.

Jean was featured in the Berwick News local newspaper (10.01.13) to celebrate her milestone. Sigung Charles was quoted as saying that she is “like a never-ending battery that keeps going and going!”

Jean, we salute you, for all your hard work, dedication and love, towards tai chi. You have shown those of us who have ever contemplated quitting, at one time or another, that, it CAN be done, with patience, perseverance and determination. You deserve the title of ‘Golden Lion’s longest serving tai chi student’.

Who knows, in a decade’s time, you may well earn a place in the Guinness Book of Records, as being the oldest (no offence!) person in the world doing tai chi. We would like to see that!

If you would like to attend classes in our tai chi for seniors programme, please call us on our central telephone number 9796-1066 for class times and fees or email us through our contact-us form.