I want to share some info with you and all at Golden Lion Academy about Seth. He is in your Martial Arts Kids Kung Fu programme. 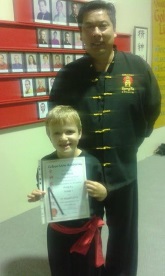 Seth is 8 in February, 2015.   Thankyou Master Richard for Seth’s privacy as he wants to be a “kid”, not a patient, but he is now happy to share with all at Golden Lion Academy.

Seth was diagnosed with Acute Lymphoblastic Leukaemia (ALL) in May 2012. He has had intense chemotherapy and also radiation.  Yes he lost his hair, he has now finished the chemo that destroys hair cells, so his has grown back.  Each month he has to take steroids twice a day for 5 days.  He will continue with chemotherapy until about October 2015 if he stays on his current treatment track.

The chemo & steroids combined has affected his fine motor skills.  So much so, that he had trouble writing short sentences before his hand would hurt and picking up anything was difficult, particularly with his left hand (He’s also left handed for writing).

He had trouble with walking and running was not even a slight possibility.  He started Kung Fu in mid 2013 and I hoped it would help with refining his fine motor skills further.  Seth no longer needs to see the Physio and appointments with his Occupational Therapist are less frequent because his re-development has been quicker than expected.  I and his Physio are certain it is because of his participation and love of Kung Fu.

Kung Fu has not only helped with discipline, but his left side is now stronger than his right side!  He can not only walk again properly, but run!  Today he is at school, in fact he is at his first school athletics carnival (he is in grade 2 this year).  Kung Fu has helped re-develop his muscles much quicker than any of his Dr’s thought, so much so that we were told he’d only be able to watch at the carnival and not participate.  He is proudly walking around showing everyone his ribbons that he won!!!

Although he has missed quite a lot of classes due to being too sick, he always talks about Kung Fu and wonders what the class is learning when he’s not there.

Master Richard Tsui-Po and all involved with Seth, THANKYOU.

Attached is a pic of Seth when he passed his Grade 1 test in about September 2014, one day he might be known as Master Seth?!?!?!

If you’re not smiling, why not, because Seth is.