In dim mak kung fu, yin and yang power can be applied to our training through our state of mind, composure, fighting stance, and silence (examples of Yin), as well as our breathing, pouncing, and explosive power (examples of Yang). 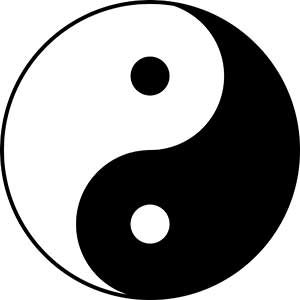 Yin and yang are fundamentally opposing forces, where each balances the other out, and where neither is able to exist without the other. The black and white circle is the representation of Yin and Yang that people are most familiar with, with the black Yin mirroring the white Yang. A constant state of change is demonstrated through the curved line down the middle, where Yin seems to chase Yang, and vice versa. The smaller circles show that both Yin and Yang exist within each other.

The flow of chi (energy) is the product and catalyst of Yin and Yang. Chi “fuels the creation and causes all to come into existence”, and “is generated in the eternal interplay of these two natural forces (see Dai Sifu’s book-The Two Dragons of Dim Mak). In general, Yin represents the “passive” state, and Yang represents the “active” state. In kung fu, this can be applied to our training through our state of mind, composure, Fort Knox (fighting stance with a solid guard), and silence (examples of Yin), as well as our breathing, pouncing, and explosive power (examples of Yang).

Take, for example, one preparing to deliver a technique to an opponent. The thought process (mental state), silence, composure, relaxation of the body and inhalation before a strike, are all part of the Yin side of fighting. This paves the way for the transition into Yang, forces of the opposite nature. The explosive force of Yang can be demonstrated through the Ghost Hands technique, accompanied by exhalation of breath (a noise or shout). Essentially, Yin can be thought of as internal spirit, and Yang as physical manifestation of spirit.

Often, the focus tends to be placed on the Yang – that is, the “outcome”, rather than the “preparation” (Yin). Because of the energetic nature of Yang, it is easy to get caught up in wanting to deliver “power”, and obtaining a result. However, without taking the time to invest in mental preparedness, calmed breathing, and composure, there will be lack of power. Investing in Yin will result in better accuracy, and focus of energy, where it is required; for instance, focusing chi to your hand for a palm strike. However, this is not to say that Yang is unimportant, or to be disregarded; ultimately, the amount you put into Yin will be the amount you get out of Yang.

An example of how Yin’s significance is demonstrated through the “Fort Knox”. The Golden Lion Instructors will often refer to the Fort Knox – a fortified, impenetrable guard, essentially composed of an angled fighting stance, completely protecting one from their opponent, but also allowing both offensive and defensive strikes to be executed.

The Fort Knox relates to the Yin component; it is the “ready position” of Golden Lion dim mak kung fu. Taking the time to assess your situation (Yin) allows you to make adjustments to give you the greatest advantages in relation to distance (how best to close the gap between you and your opponent), and the timing of strikes and blocks, which will help produce speed, and power (Yang). However, while having a strong and solid guard is important, it does not necessarily mean having a rigid and inflexible guard; for example, keeping your guard relaxed until the point of impact with the target. As it incorporates many important points in regards to preparation, the Fort Knox is a key Yin element.

Use Yin and Yang to increase Power

In summary, Yin and Yang are opposite forces, and by identifying and understanding how different aspects of our training correspond to each, we can continue to improve our skills and appreciate how the different components of our learning intertwine and work in harmony with each other. Subsequently, our internal and external power would increase exponentially if we are able to use these two powerful energies correctly.

Essentially, we hope this article provides you with knowledge that you can reflect upon the next time you train. To leave you with some words from Dai Sifu’s book, The Two Dragons of Dim Mak: “They [Yin and Yang] define a bi-polar relationship that exists between all things and all living systems, including humans… neither Yin nor Yang can ever truly dominate the opposite force, for at the very moment that one reaches the highest point of its power it transforms into the other.”

More details about various pressure points can be learnt from the Dim Mak Manual.

Thanks to Laura Tan and Bianca Mohan, dim mak and kung fu students at our Murrumbeena academy.